Congratulations to our former County Commissioner Rachel Webb-Jenkins on being awarded the second highest award in guiding – The Laurel award.

To be nominated and awarded the Laurel you must have made an outstanding contribution to guiding. Rachel has definitely done this both locally in Loughborough where she has her weekly Brownie unit but also at county level where she organised ‘Take over the Tracks’ for Brownies during the Girlguiding centenary.

She also took Leicestershire through five years of fun and mayhem including our own centenary; Escape county camp; visits to all of the TACS (Girlguiding training and activity centres) and a couple of trips to Scotland with a car full of bras.

There was also the serious stuff, developing our social media and PR and at region she helped to oversee the ‘Doing our Best’ pilot.
Rachel was presented with her Laurel award on Sunday 10 April at Topstones by Clare Shinton, Girlguiding Midlands Chief Commissioner. 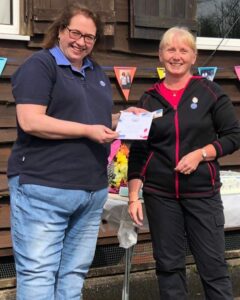 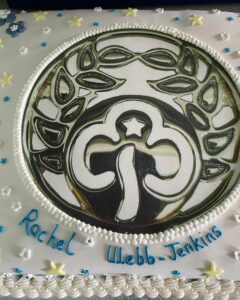 Whatever age - discover a community of adventure, fun and friendship. Our organisation is all about making unforgettable fun moments for your child. Register your Daughter with Girlguiding today!

Get involved with Girlguiding Leicestershire

Whether it’s an hour or two every few months or a regular weekly commitment, there are lots of ways to volunteer and help us create amazing opportunities for thousands of girls across Leicestershire.